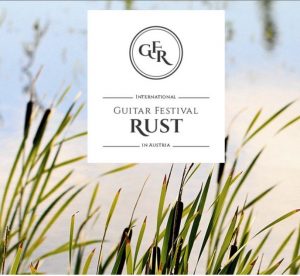 The International Guitar Festival Rust was initiated in 1999 by Gabriel Guillén and has been organized since that time under substantial public and international interest. In the meantime the festival is grown to be one of the most important guitar festivals in Europe.

At first, the festival was dedicated to international composer, tutor & journalist John W. Duarte, who passed away in 2005.
Now the Guitar Festival Rust is held in special memory of the 2016 deceased Alirio Diaz.

The International Guitar Competition with participants from more than 10 different countries takes place in  front of a jury consisting of Austrian and international experts. The Festival consists of five concerts (inaugural concerts, recitals, winners gala and awarding ceremony), masterclasses, workshops, the “International Guitar Competition Alirio Diaz” and an Instruments and music sheet exhibition.
In 2017, a composition competition for the promotion of classical guitar music was held. It was a great success with more than 40 contributions from composers from all over the world.

To celebrate the 20th anniversary of the International Guitar Festival Rust, a matinee with EuroStrings Young Stars, renowned virtuosos, conductors and orchestra will be held on Thursday 29 March 2018 at Seehof Rust, Austria.