Despite the pandemic and these difficult times we are facing, our scholarship programme is continuing. We are so happy that we have another EuroStrings scholarship winner. She is Eleanor Kelly, self-taught classical guitarist who is attending the Uppsala International Guitar Festival.

Read more about our scholarship winner:
Eleanor Kelly (1995) is an originally self-taught classical guitarist based in Merseyside, UK. Upon starting her undergraduate studies in Music (BA) in Liverpool in 2013, Eleanor was awarded a Performance Scholarship. Completing modules in performance, composition, analysis and aesthetics, and researching and writing a thesis on flamenco guitar, Eleanor graduated with a First Class with Honours in July 2016. Chosen as one of twelve guitarists from around the world, Eleanor is currently a student of the prestigious Máster en Interpretación Guitarra Clásica course in Alicante, Spain. Her teachers include: David Russell, Ignacio Rodes, Ricardo Gallen, Hopkinson Smith, Xavier Diaz-Latorre, Tilman Hoppstock, and more. In 2019, Eleanor gave the UK premiere of Claudia Montero’s Latin Grammy award-winning Luces y Sombras with the Woodside String Quartet at the Angel Field Festival and performed the work again at the International Guitar Festival of Great Britain. As well as performing as a soloist, Eleanor is one half of the D2e Duo alongside Yvonne Gründer. The classical guitar duo specialise in works by female and contemporary composers. From 2015-2019, Eleanor was the Musical Director of the Liverpool Guitar Society and directed the Liverpool Guitar Society ensemble. The LGS is a charity based in Liverpool that aims to promote classical guitar  and is a meeting point for classical guitar players. Eleanor plays a Yulong Guo Chamber Concert classical guitar. 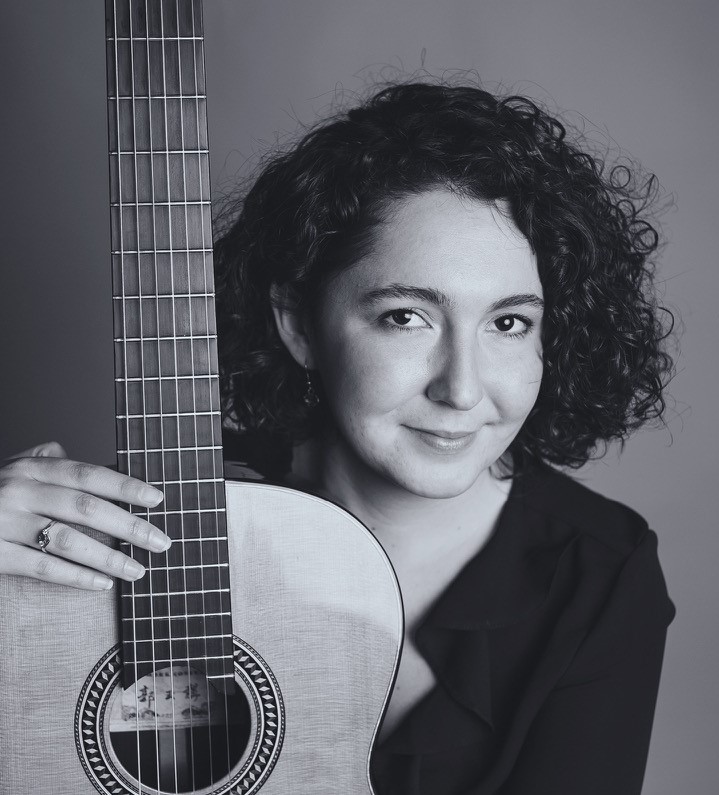